Chief John J. Bryfonski was appointed Chief of Police in Bedford, NH on September 19, 2011 after serving 27 years with the United States Department of Justice, Drug Enforcement Administration (DEA) and six (6) years as a municipal police officer and detective with the East Hartford, Connecticut Police Department.

Since his appointment, Chief Bryfonski embarked on an ambitious program that resulted in significant improvements to the department’s internal management information and data systems as well as the department’s community policing programs and patrol force deployment strategies.  Under Chief Bryfonski’s leadership, the Bedford Police Department has transitioned to an intelligence/data driven community policing based public safety model with a strong emphasis on proactive preventative and deterrent strategies to reduce harm from crime and highway related incidents.

Prior to his appointment as Chief of Police in Bedford, Chief Bryfonski served as Special Agent in Charge of all DEA operations in Pennsylvania and Delaware; he also headed up DEA’s Office of Professional Responsibility at DEA Headquarters; was responsible for DEA operations in upstate New York and was posted to DEA offices in Tucson, Arizona, Portland, Maine and Hartford, Connecticut.

Chief Bryfonski is a native of Stuyvesant Falls, New York, and attended the University of Hartford, Hartford, Connecticut where he received both Bachelors as well as Master’s degree(s) in Public Administration.  Chief Bryfonski is certified as a Commercial Pilot and a Flight Instructor by the FAA and a graduate of the Senior Management Institute for Police in Boston. 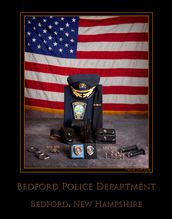